The simple fact that this is even remotely credible, is alarming. 2 days after Georgia’s Malihi – the judge with the mysterious past – IGNORED some VERY BASIC LAW to give Barry a pass, POOF, FIRST NUKE REACTOR IN U.S. in THIRTY YEARS approved in Georgia.  Below, from The Western Center for Journalism:

Was The Georgia Secretary Of State’s Decision “Greased”?

“That thing was greased,” as they say in Chicago, referring to a political phenomenon known as “being handled before table.” Well, bloggers are asking, was it? Word now coming out reveals just two days after Secretary of State Brian Kemp gave Barack Obama the green light to appear on Georgia election ballots,, the Department of Energy awarded Kemp’s state an eye popping $8.3 billion loan guarantee to begin construction on two nuclear plants. In the face of “a shocking dissent by Nuclear Regulatory Commission CHAIRMAN Director Gregory B. Jazcko,” four other commissioners approved awarding Southern Energy the first nuclear construction licenses since 1978, just one year before the tragedy of the Three Mile Island nuclear disaster put a hold on new U.S. nuclear plant construction. No new licenses have been approved until this huge Vogtle project got its go ahead to build two new reactors near Augusta.

“Jazcko said that the approved designs did not take the lessons of Fukushima into account. I cannot support issuing this license as if Fukushima never happened,” he told other NRC members before their shocking vote to approve this estimated $14 billion project. Friends of the Earth’s climate and energy project Director Damon Moglen is vowing to challenge the validity of the newly approved license in court. “The license may be granted, but these reactors are far from a done deal,” he said. Applications for 16 other plants looking to build 25 more reactors are on file with the NRC according to CNN Money reporter Steve Hargreaves , who added, “there are two applications submitted for brand new nuclear plants – one in Levy County, FL, and another outside Gaffney, S.C.”

While other viable nuclear construction projects await approval, the Georgia project got the green light in spite of the NRC director’s vehement objection as well as “12 sizeable construction change order requests (and) long-running site-specific design and fabrication problems (which) have confounded Westinghouse and its lead contractor for more than two years.”

So on February 7, 2012, Georgia Secretary of State Kemp stated “after careful consideration of Administrative Law Judge Michael Malihi’s initial decision and all record evidence based on the criteria set forth in this process, I find that the Respondent, President Barack Obama, meets the State of Georgia’s eligibility requirements.” And a scant two days later, Obama’s DOE finds the money to award Kemp’s state a whopping $8.3 billion loan guarantee for a $14 billion nuclear project and license approvals not done in the industry in over 30 years!

One blogger said after the Malihi story, “This crap needs to end–NOW!!!” Another blogger who tipped me off about the Malihi-Nuclear decision connection mused, “The fix was in long before this challenge was ever submitted.”

Irrepressible Orly All Over America

Below is the latest from “birther queen” Orly Taitz. I hate the term “birther” and I’m not particularly fond of “queen” and I especially don’t like them together, but everyone understands them, so…

This is excerpted from an update she posted on her site (very) early Saturday morning.

My main concern … (is) that no judge will remove Obama from the ballot based on Minor v Hapersett only… It will take more, than that. It will take a combination of showing malfeasance, criminal behavior by Obama in conjunction with bringing forward the issue of eligibility based on his father’s foreign citizenship. The judges understand that the citizens will not accept removal of a siting President from the ballot based on the interpretation of the Constitution only, as the reasonable question will be: why was he allowed in the WH in the first place? …Just as it happened in Watergate, evidence of flagrant criminality on part of the sitting President will do him in at the end…”

Orly Taitz has filed an Emergency Appeal to the Georgia Secretary of State, providing a nice summary of the evidence presented in court. So if you missed it, here is the “Cliff Note” version.
Taitz/Obama GA Emergency Appeal FEB 2012

It seems the merits weren’t so meritorious.

Obama will remain on the GA ballot.

The judge’s order is here. 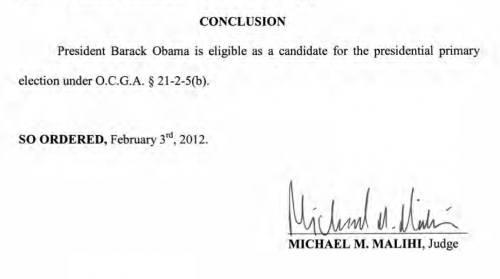 Not being a lawyer, I’m rather out of my depth reading these things, but it seems to me he gave the (theoretical)  next group that tries this in his courtroom a very clear threshold to meet to be convincing to him the next time.  He was very generous detailing precisely what the problems were with Orly Taitz’s identity fraud witnesses, and – I could totally be wishing this but – it seems to me his problem wasn’t so much with the evidence as it was with the caliber of the expertise of the people presenting it… i.e. “Get me a couple of qualified Feds in the box and I’m listenin’…”

Motion for Obama Contempt in Georgia

From The American Thinker:

Obama was served a subpoena to appear in a hearing last week in Georgia over his eligibility to appear on the state’s ballot.  Obama’s attorney, Michael Jablonski, immediately filed a motion to quash the subpoena, which was denied by OSAH Judge Michael Malihi.  In his denial, Judge Malihi seemed to leave open the possibility for a quash, if Jablonski had only offered appropriate legal authority in support.  The judge asserted that “Defendant’s motion suggests that no President should be compelled to attend a Court hearing.  This may be correct.  But Defendant has failed to enlighten the Court with any legal authority.”

Instead of respectfully following procedure, however, Jablonski went over the judge’s head and straight to Secretary of State Brian Kemp with a letter, sent the day before the hearings were scheduled, arguing that the entire matter should be dropped as it was “baseless, costly and unproductive[.]”  Jablonski’s letter concluded: “We await your taking the requested action, and as we do so, we will, of course, suspend further participation in these proceedings, including the hearing scheduled for January 26.”

Kemp responded that his office lacked authority under Georgia law to suspend the hearings, and warned Jablonski that “if you and your client choose to suspend your participation in the OSAH proceedings, please understand that you do so at your own peril.”

Jablonski remained true to his word — neither he nor Obama showed up for the January 26 hearing.  I noted last week that Obama was not scheduled to be anywhere near Atlanta on the date of the hearing, although I had wondered if still, perhaps, Georgia might be on his mind.  According to reports in the blogosphere, the president’s schedule on the morning of the 26th was open, and according to an unnamed source, Obama watched the live feed of the hearings.

Perhaps Obama, as well as the several mainstream media news outlets I spotted at the hearing, were merely watching in hopes that the “crazy birthers” would really do something…well, crazy.  Or unlawful.  In fact, though, it was the president himself and his defense team who were the ones defying the rule of law.

The mainstream media, in lockstep with Obama, reported nothing of the events, in a stunning blackout on a truly historic hearing — one that discussed the eligibility of a sitting president to run for a second term.  And more troubling was the fact that the media failed to acknowledge the even more sensational news — that the president and his defense attorney snubbed an official subpoena.

Today, Attorney Van Irion, on behalf of his client, Georgia resident David Welden, filed a “Motion for Finding of Contempt” with Judge Malihi.  Irion asserts that “… Defendant Obama willfully defied this Court’s order to appear and testify[,]” and his “actions represent a direct threat to the entire judicial branch and the separation of powers between the branches of government.”  Irion argued that “[s]uch a declaration cannot go without response from this Court” and moved that the Court refer the “matter to the Superior Court of Fulton County for confirmation that the Defendant violated Administrative Rules of Procedure … and to determine appropriate sanctions.”

Now, will we get the opportunity to debate the meaning of “subpoena” — or whether the law even applies to this president?

UPDATE II – January 31, 2012: Came across this sort of all-purpose clearinghouse site for all things birther. If you want to drop into the vortex and not work for a couple of hours, knock yourself out.  It’s a good jumping off point to all the big sites on the subject.

UPDATE I – January 31, 2012:  The link to the transcript is below, but here’s a link to the evidence submitted to the court in support of the testimony.  I defy you to look at it and believe Obama’s bullish*t nativity story.  It’s pretty damning stuff.

I hate the term “birther” but everybody knows what it means, so I used it.

Also, again, for the record, I do not subscribe to the theory that the problem with Mr. Obama’s records is that he is not a “natural born citizen” due to the British citizenship of his father, nor that he was born somewhere other than in the United States. I absolutely believe he was born in Hawaii.  It’s AFTER that the problem begins. My own pet theory is that he was adopted in Indonesia, thereby voiding his original cert, so the one he released is “fake but accurate” if you know what I mean – and I think you do!  Links to my previous posts on the matter are here & here & here.

SO!  Here is the link to the transcript.