Everybody’s an Expert – in D.C.

This kerfuffle over contraception/abortofacients/sterilization & the Catholic Church has exposed – AGAIN – the olympic hubris of the Left.

To hear them tell it, they are not only bureaucrats, but profit/loss insurance industry experts AND Ph.D.’s in theology.  The arguments they proffer in what to non-propagandized people is a SCREAMINGLY clear issue of 1st amendment religious liberty are TOTALLY tangential to the issue and UTTERLY pedantic.

First:  This meme that the insurance companies won’t be crushed by the cost of offering FREE contraception to EVERY AMERICAN who wants it and it will actually inure to their benefit because of the presumed, resulting diminution in expensive births begs the question: If these rapacious, greedy insurance companies really are as they’ve been sold, DON’T YOU THINK THEY WOULD BE DOING THIS ALREADY??????

So… what?  Now you’re an insurance expert AND a hack bureaucrat? Like your argument about the greedy insurance companies’  costs coming out in the wash YOU CAN’T HAVE IT BOTH WAYS. Please…

And second, but related:  Now you’re a bureaucrat and a THEOLOGIAN?

WHO THE HELL ARE YOU to tell the Catholic Church – based on your vapid, stupid, COMPLETELY OFF-POINT laundry lists of stats about how many Catholics already break the church’s rules about these matters – THAT THEY ARE WRONG?

THE PLAINTIFF CLERGY ARE THE FOREMOST EXPERTS ON THEIR OWN – INFORMED – OPINONS OF WHAT THIS MEANS FOR THEIR FAITH – NOT YOU, YOU POMPOUS ASSES!

This is NOT YOUR DECISION to make. It’s THEIRS, you busy-body gimme-girl MORONS. 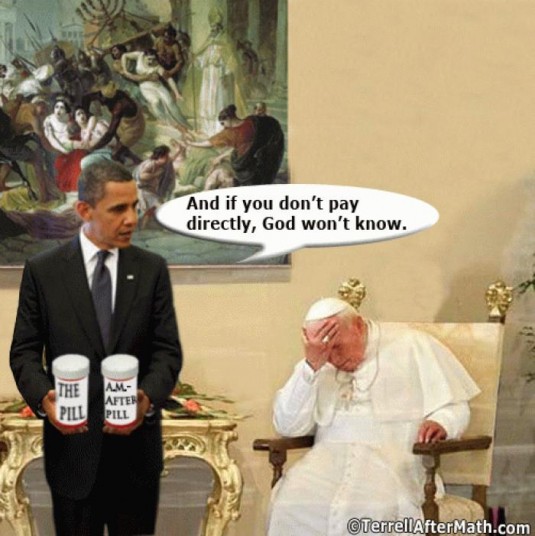 The Evil Boy-Prince of the Church

There’s no love lost between me and the Catholic Church, heaven knows (pun intended). But I think we can all agree, Catholics, lapsed, non, and otherwise, that what Obama did this week was beyond the pale. If you somehow missed it, he is forcing them to provide & pay for abortion, contraception, and sterilization. Quite apart from whatever you may feel about any one of those individually, it’s the principle being threatened that’s of deep concern here, and Peggy Noonan nails in WSJ today. Here’s an excerpt:

”…The Catholic Church was told this week that its institutions can’t be Catholic anymore… There was no reason to make this ruling—none. Except ideology. The conscience clause, which keeps the church itself from having to bow to such decisions, has always been assumed to cover the church’s institutions… The ruling asks the church to abandon Catholic principles and beliefs; it is an abridgement of the First Amendment…

(Even) Catholic liberals, who feel embarrassed and undercut, have also come out in opposition. The church is split on many things. But do Catholics in the pews want the government telling their church to contravene its beliefs? A president affronting the leadership of the church, and blithely threatening its great institutions? No, they don’t want that. They will unite against that.

The smallest part of this story is political. There are 77.7 million Catholics in the United States. In 2008 they made up 27% of the electorate, about 35 million people. Mr. Obama carried the Catholic vote, 54% to 45%. They helped him win. They won’t this year. And guess where a lot of Catholics live? In the battleground states.

There was no reason to pick this fight… There was nothing for the president to gain, except, perhaps, the pleasure of making a great church bow to him.

…You have awakened a sleeping giant.”

It’s hard to carry a Progressive school book education onto national television when you’re facing someone who knows true history sitting across the desk from you.

Oh, the ‘Mother of Planned Parenthood’ did champion a broad range of reproductive health services to be made available to all women, ’tis true, but what is also true is she was a bloodless eugenicist - Eugenics was a new idea in the 1920′s & very fashionable at the time - and had no problem whatsoever with ridding the world of little black babies and all babies somehow not meeting the ‘breeding’ standards she regarded as worthy to join the human race.

Poor Bob Shieffer.  Now, when he goes to look it up, as Herman exhorted him to do, he may just find the truth behind the decades of Progressive revisionist history.

He’s never struck me as a guy who needs to be told to think BIG about himself, but HERMAN!

You MUST answer, for instance, the abortion question thusly:

ALL abortion is WRONG and as President I will do NOTHING to help it’s existence, and will, in fact, get every federal penny out of it and do everything I possibly can to see it eradicated from the books.  Understand, I am not running to be King-in-Chief, nor am I running to be Minister-in-Chief.  If congress sends me a bill outlawing it, I will happily sign it.  If congress wishes to convene to add an amendment to the constitution to outlaw it, I will heartily encourage that process.  But in the same way I object to Obamacare coming between you and your doctor, you don’t need me coming between you and your conscience during such a private decision about, what is – regrettably – at this moment, a legal medical option.  Again, I abhor it.  But as President, I’m not your King, and I’m not America’s Minister.  I am, however, anti-abortion!

Rick Santorum & others have jumped ugly on Herman for a really sloppy, naive, politically unskilled answer he gave on abortion that any reasonable American heard and understood. He was simply saying as a Dad, it would be a heartbreaking situation… It was, without a doubt, a terrible answer, politically speaking. But Americans are listening like they have never listened before to their candidates, and have as limited a tolerance for demagoguery as I have ever seen.

Take cheap, unfair shots at Herman at your own peril, kids. I think it will backfire. BIG.