NYT was all over naked ladies yesterday.

MSNBC is all over naked ladies today.

Cue Obama to swoop in and save women from themselves.

These people are GENIUS propagandists.

*Snort* Yup. That about sums it up… 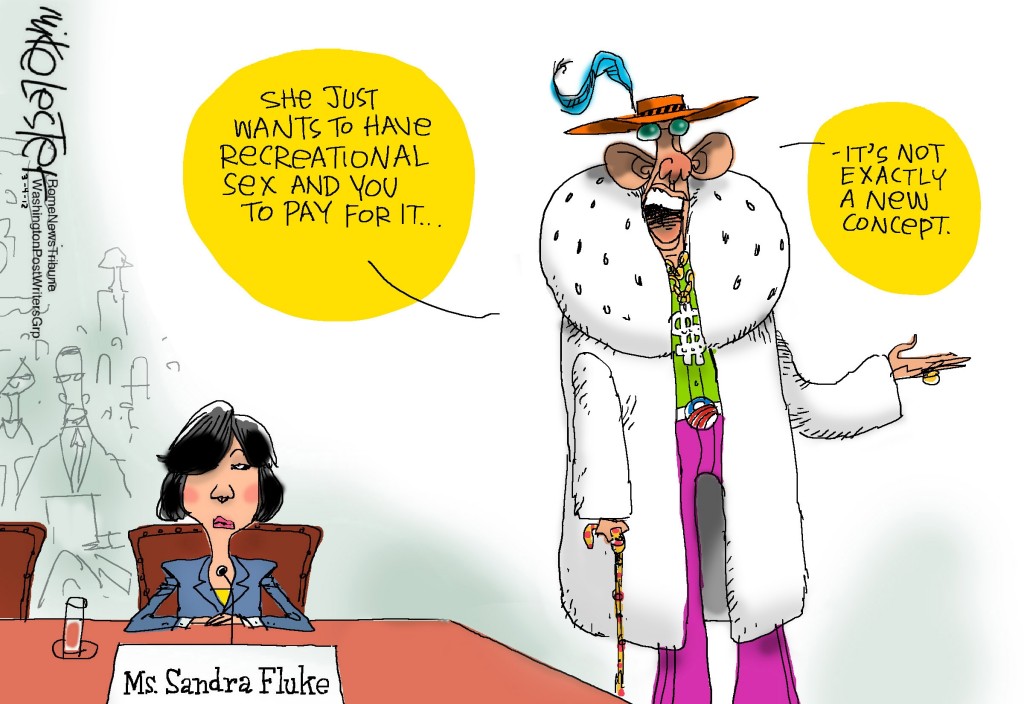 UPDATE: Hah!  I just clicked over to NewsBusters and see they’ve done a piece on the same subject as this one!

Remember that old joke when you ask a woman how much it would take to sleep with her, and she starts out offended then by the time she’s told she’d be paid something over a million dollars (or some high price) she’s interested? She’s then reminded that a minute ago she was offended because she didn’t want to be thought of as a slut, so she remembers herself and shifts back to protest. Undeterred, the man keeps throwing out dollar amounts higher & higher while her protests grow louder & louder, then, finally, exasperated with her reconstituted righteousness, the man silences her by saying “Well, now that we know what kind of woman you are, we’re just negotiating the price.”  That’s the gist of it, though I relayed it rather ham-handedly.

Well, the left – like a memo went out – is UP IN ARMS about Rush Limbaugh building on that joke about Sandra Fluke.  I heard him do it live, then just heard both Chris Matthews and Alan Colmes devoting entire segments of their show to eviscerating him for saying that there’s a name for “wanting to be paid for having sex” i.e. having someone else pay for her contraception.

I thought it was rather clever.  There was no malice in his rant.  He did answer his own question by saying “she” would be called a “slut.”  I cringed a bit when he said that, but he was building on a theme.  Now, if I were his wife, I would have said “Honey – don’t go there.”  I would have said to leave the thing unsaid.  He chose to cross a line from clever to crude, and for that he should get a slap on the back of the hand, but not be fired which is what the lefties are calling for.

This is particularly ironic since Matthews shares a network with Ed Shultz who just last year called Laura Ingraham – directly – and just for having an opinion – a “conservative slut.”  And Colmes was just forced to apologize for making Mrs. Santorum cry – literally – because he didn’t like the way she mourned her dead son.

I’m perfectly willing to call out my own when they screw up.  And I can absolutely make an argument that Rush went too far and might want to just send Ms. Fluke a note telling her that if his riff hurt her feelings he certainly meant no harm, but his inference was once removed and indirect, and not meant to describe her, as a person, but rather her assertion that it was someone else’s responsibility – financial responsibility – to pay the freight for her sexual activity.  But this level of outrage?  From these people?  And fired?

I was going to let this go, because I remember what it was like to be a 20-something cat in heat and too stupid to have actually survived every stupid thing I stupidly did when I was twenty-something and stupid – Just like nearly ALL people in their 20′s are.

But I just saw this UNBELIEVABLY HELPLESS MAIDEN on television again and I HAVE to vent.

Sandra Fluke, if you are not familiar with her, was the oh-so-earnest witness testifying before Congress at the behest of Nancy Pelosi about her “women” friends “suffering” “medically” “financially” and “emotionally” because they had to pay for contraception. She tells of the painful experience of one top flight law student friend who had to walk away – embarrassed and painfully humiliated – from the pharmacy counter when she was told – to her shock SHOCK – that her insurance didn’t cover her right to partay.

And that was the least pathetic, mealy-mouthed thing Sister Victimhood “If only I were non-elite & oppressed enough to go to some cheap, sh*tty school instead of the one I was FORCED to go to against my will at $60,000 per year, I could f*ck like a rabbit” had to say…

First problem:  No grown “woman” worthy of the designation is that helpless.

Second problem:  THIS is the caliber of grit and resourcefulness you get from TOP FLIGHT $60,000 PER YEAR GEORGETOWN law school educated lawyers?  I’ll take the state school grad who had to fight and scrap to get there, thank you. I mean, PLEASE.  If THIS is what rises to the level of an intractable problem for this lawyer, worthy of CONGRESSIONAL FRICKING TESTIMONY, I’d hate to see what happens if the judge denies her a motion or talks nasty to her.  OH MY GOD.

Third problem:  This is the grown-up version of the child of the helicopter-mom.  This is a child who has looked to someone else to manage her and clean up her messes HER WHOLE LIFE.

SUCKS TO BE YOU, CUPCAKE.  So if having the insurance coverage Georgetown provides is a deal breaker because it doesn’t cover nookie then YOU NEED TO MAKE A GROWN UP DECISION about your F*CKING PRIORITIES IN LIFE.  A GROWN UP realizes that NOTHING IN LIFE IS PERFECT.  If it’s THAT important to you to have state-paid nookie, GO TO A F*CKING STATE SCHOOL AND BRING A TOWEL.

OR KEEP YOUR LEGS SHUT.

OR FIND A GUY TO BUY HIS OWN CONDOMS.

OR GIVE UP YOUR STARBUCKS TWICE A WEEK.

OR CONSIDER THAT YOU ARE SO F*CKING LUCKY TO BE WHERE YOU ARE AND IT’S F*CKING UNSEEMLY FOR YOU TO ASK THE STATE FOR NOOKIE MONEY WHEN YOU HAVE SUFFICIENT RESOURCES – ONE WAY OR ANOTHER – TO ATTEND GEORGTOWN F*CKING LAW SCHOOL.

I can’t wait to see the next congressional testimony from this girl.  She’ll be asking for mandated orgasms or something.