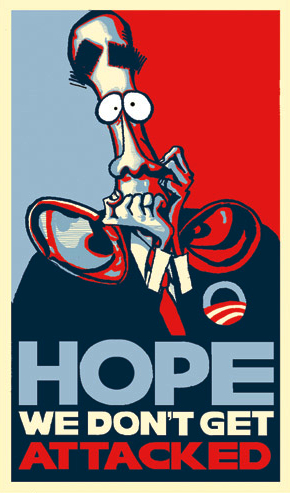 The only thing wrong with this depiction of Obama is that the fear he expresses is ours, not his.  Obama, I have no doubt, believes that we can drop our military pants and continue to be safe behind the firewall of his awesomeness.  Handy thing, sociopathic narcissism.  Makes it possible to drone bomb half the f*cking Middle-East without a single declaration of war on any of the multiple sovereign nations he turns into rubble, and still go to sleep at night sure they don’t mind.  Also helps you sleep at night when you make yourself judge, jury, and executioner of American citizens.  Yup.  Sure is nifty to be Bam-Bam.