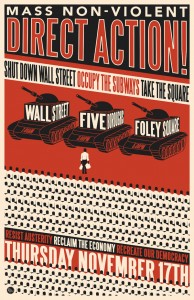 Tea Party hasn’t had a single arrest in 2 years but Occupy Wall Street has 3,500 in 2 months?

Tea Party applies for & pays for the proper permits, says their peace, cleans up after themselves, then goes home?  Often leaving places cleaner than they found them and nearly always doing the clean up, from the first, without being told to do it from the stage?

OWS as recently as yesterday urinated in the lobby of a Bank of America branch they “occupied” in San Francisco? OWS has been photographed pooping on a police car? Trampling on an American flag? Raping? Robbing? Even murdering?

They’re propaganda whores for the White House?  Who’s lovin’ this?  Van Jones never really left the Administration?  He’s in their pitchin’ and organizing with Soros money paying all the printing costs, etc. for this whole thing?  It’s “organized chaos” from the top down for the bottom to rise up?

They’re frankly a little aggravated we didn’t do it for ‘em?  Which is what they were trying so hard to do all these months?  Make us be the violent mob, but when we wouldn’t they put Van Jones to work?