NO REPRESENTATION without TAXATION!

It’s time to revisit the phrase that founded this nation – in reverse. We’ve got 53% makers & 47% takers in this country. That’s too close to a tipping point, gang. Way, way too close. Obama likes to talk about having a ‘stake in this country’ and ‘equalling the playing field.’ How about everyone having some skin in the game, too? A couple of other prominent Americans had thoughts on the security of our Republic, too:

‘A democracy is nothing more than mob rule, where 51% of the people may take away the rights of the other.’

‘When the people find that they can vote themselves money, that will herald the end of the Republic.’

Is the Fair Tax Herman Cain’s Ace in the Hole?

Bruce Bartlett has served as an economic adviser in the White House, Treasury and Congress. 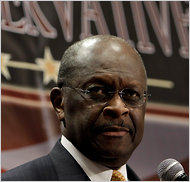 On Saturday, the pizza magnate Herman Cain announced that he was running for the Republican presidential nomination. While he has to be considered a long shot, he has something going for him that could make him surprisingly viable: his strong support for the so-called Fair Tax.

The Fair Tax is a proposal that has been kicking around for at least 20 years. It would replace all federal taxes, including income and payroll taxes, with a national retail sales tax similar to those levied by the states. Indeed, a prime virtue of the Fair Tax, in the eyes of its supporters, is that it would be collected by the states, thus allowing for abolition of the hated Internal Revenue Service and an end to filing tax returns or keeping financial records.